Michael's first visit to a Spiritualist church was in the early seventies as a child. His dad took him to Catherine Street Spiritualist Church in Doncaster. The medium at the church, Mrs Groom, came to Michael and gave him details of a possible future within the spiritualist movement.

He never forgot this message and it helped motivate him over the coming years. Michael periodically sat in his dad's circle and listened in wonder at the amazing channelling teachings that came from the spirit guides and teachers. 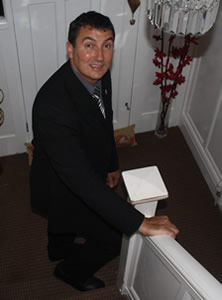 He was involved in many different spiritual circles from 1985 to 1990 and in 1991 he began attending Catherine Street Spiritualist Church under the guidance of the then church president, Vera Boughon OSNU, and current president June English MSNU.

Vera and later June were very disciplined and ran development sessions to a high standard. Michael always held Thursday nights sacred and for many years he would attend the open circle and subsequent development circle.

Michael will always be grateful to Vera and June for all that they taught him in those early years. The knowledge and guidance they imparted contributed into enabling him to build a strong foundation for what was to come later.

The college runs Psychic and Mediumship training and development courses and students from all over the world have developed their psychic and mediumistic abilities there.

Michael has been to the college on many development courses over a period of 18 years. He has been fortunate enough to have been trained by some of the finest tutors in the country. Much of what he has learned has allowed his mediumship to flourish.

Hi Michael
I just wanted to say thank you for my reading last night. I feel so much better having spoken to you (and my dad)
Also, I just wanted to let you know about something you said. You mentioned butter to me and I didn’t know what you were talking about. However, this morning I have made the connection.  There’s a story about my dad finding a pallet of butter in a lay-by. It’s a long story but we used to really laugh about it.  It didn’t occur to me then but is something he would have brought up to make me laugh.
Thank you again.
Alison, Oct 2017